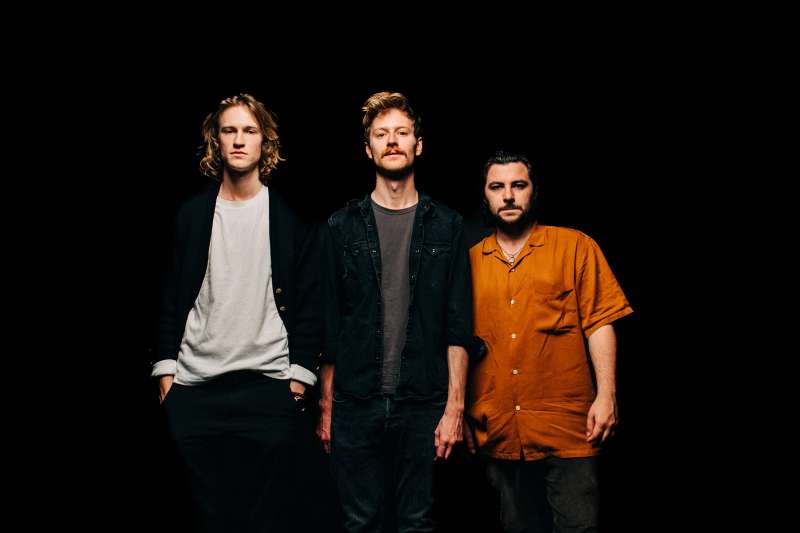 Kerala Dust’s new album ‘Violet Drive’ is a record deeply affected and influenced by its surroundings. The band, formed in London in 2016, are now based between Berlin and Zurich, and the three Brits – Edmund Kenny on vocals and electronics, keys player Harvey Grant and guitarist Lawrence Howarth – have created a deeply European album torn between the past and future.

Formed out of a growing love of electronic music mixed with a history in indie bands, Edmund started the band at a time when making electronic music on a laptop “seemed like the most sensible thing to do”. He adds: “I got really into club music and used to go to Fabric and Corsica Studios loads. I got deep into the endless repetition of all of that music, and the way that, as it repeats incessantly, things unfold on you and it almost becomes a weird sort of mantra, leaving you in a clear headspace.” These hypnotic elements are a defining force behind Kerala Dust, whose music incorporates blues and americana mixed thrillingly with untraditional electronic beats.

In a break from past ways of working, the songs on ‘Violet Drive’ were built from the drums up, and this truly stunning, off-kilter percussion defines the album; in keeping with the record’s inspirations, they often sound like a war cry. Recorded in two weeks in a studio in the Alps just outside of Zurich by Tillman Ostendarp, the thudding backbeat laid down provide the framework upon which the album’s lyrics and instrumentation – flashes of blues-y guitars and woozy synths, Edmund’s deliciously deep, syrupy voice – bounce off and flesh the songs out. “I'd been previously writing in quite an Americana way,” he explains, “and this record is way more central European in terms of its influences,” with German legends Can a constant touchpoint.

The universe the album inhabits is also slowly being furthered with its accompanying music videos, which have been shot around Berlin and beyond, and feel interconnected with European history. He says: “Last year we went to Prague and then Budapest and then Warsawon a European tour. We felt this sense of actual, real interconnectedness between these cities, and this overarching European identity and sense of shared culture.” As a result, ‘Violet Drive’ became “a very, very European record”. The sense of interrogating perceived wisdom around British and European history is at the heart of the fantastic, monumental ‘Violet Drive’, and Edmund looked to PJ Harvey’s 2011 masterpiece ‘Let England Shake’ for inspiration in how it tackles these knotty issues. “It’s melancholy, but also has a decisiveness about how to view history as well,” he says of the landmark album. “There's an insecurity there.”